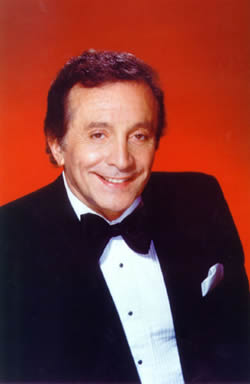 When an artist is able to combine several important elements — numerous international hit records, personal charisma, and a unique vocal style — it inevitably leads to success. Known for such hits as Spanish Eyes and Can’t Help Falling in Love in the 60’s, Al Martino is presently in the midst of beginning his second career, which has already taken off with great momentum in the European market. Since the fall of 1993, Al Martino’s songs have flooded the radio and television airwaves in Germany, and he is consistently selling out concerts throughout the continent.

Al Martino, born Alfred Cini, made his singing debut 50 years ago in Philadelphia with the song Here In My Heart. What a debut it was! The title instantaneously sold over one million copies. With this ballad, Mr. Martino became the first American artist to hit number one in the British “single” charts during 1952, consequently putting him into the Guinness Book of World Records.

How did this landslide breakthrough occur? In his earlier years, Martino worked hard in the family’s construction business, but in the evenings, he used what little free time he had, to perform in clubs and bars of his neighbourhood.

It wasn’t until Mario Lanza, already a celebrity at the time (and friend of the family), encouraged young Martino to pursue a musical career, and to move to New York. By 1950, Martino landed a much sought-after record deal with Capitol Records, after winning the first prize in Arthur Godfrey’s “Talent Scout Show.”

When Lanza was approached by Capitol to sing Here In My Heart, time constraints on his schedule provided the opportunity for newcomer Al Martino to step in and sing the song. From this point on, Al occupied a place at the zenith of international show business. His recording and concert success extended not only throughout America, but included Europe (especially Germany) and Australia.

One of the most successful Martino hits was Spanish Eyes, achieving several gold and platinum awards for sales. In 1965, the song reached number 15 on the British single charts. Even today, this classic by the late composer Bert Kaempfert is among the 50 most-played songs worldwide. Other Al Martino classics are still requested on a retail level, and are appearing periodically.

Another smash hit was the mega-seller Volare. In 1976, this catchy tune reached number one on the Italian and Belgium charts, and was in the Top Ten in Spain, Holland and France, as well as in many other European countries.

For over four decades, Martino has continued to deliver songs to the public in his own inimitable style. Memorable hits such as Painted Tainted Rose, Living a Lie, I Love You More And More Every Day, Tears And Roses, Mary In The Morning, I Love You Because, Can’t Help Falling In Love and To The Door of the Sun (Alle Porte Del Sole) have enabled this widely celebrated artist to collect numerous honours and awards.

Martino has also proven himself to be taken seriously as a film actor. In 1972, he played that much sought-after role of Johnny Fontane in Frances Ford Coppola’s epic film The Godfather. Thus, he gained the respect of his fellow actors, including Marlon Brando and Robert Duvall. Martino also sang the film’s title score, The Love Theme From The Godfather.

In May of 1999, Al and his group of musicians were asked to perform at the home of entertainer Billy Joel in honour of Billy Joel’s 50th birthday.

Just as Martino’s past was filled with excitement and success, his future looks just as promising as he begins his second worldwide career . Capitol Records has recently released “Great Gentleman of Song… Al Martino” with 18 wonderful standards and the acceptance has been overwhelming!