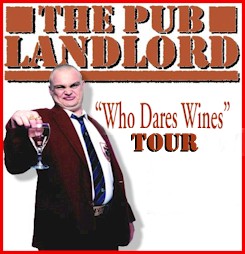 We joined multi award-winner Al Murray, THE PUB LANDLORD, on his 2002 one-man-mission to put the Great back into Great Britain. His hilarious live stand-up shows have seen him become one of the most popular comedy acts in the country – winning the Perrier Award (after 4 successive nominations) at The Edinburgh Festival and securing Oliver Award nominations for both of his celebrated sell-out London West End runs.

The Pub Landlord is a regular face on British television, notably performing in front of Her Majesty The Queen and 12 million TV viewers at The Royal Variety Performance (ITV 1) and starring in two series of his aclaimed pub based sit-com Time Gentlemen Please (Sky One).

We hope you didn’t miss this chance to see the man who understands that,
“rules is rules, and if we didn’t have rules then where would we be, eh? That’s right, FRANCE!”

And it was….
“pint for the fella, glass of wine/fruit based drink fro the lady.”

What the press said…

“I laughed so much, lager came out of my nose.”
Stephen Armstrong, THE SUNDAY TIMES

Why not visit the AL MURRAY official  web site now?