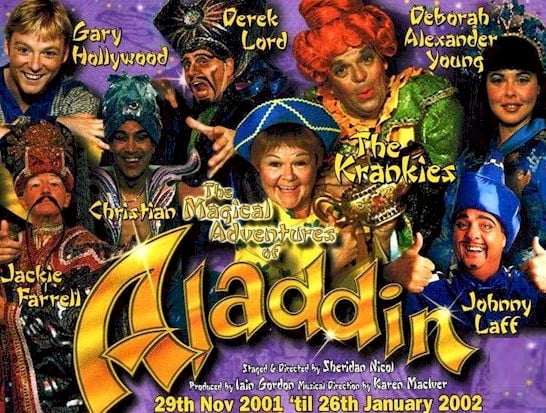 Join us on this enchanted Magical Adventure!

Hop the carpet and fly to a whole new world, a magical place of mystery and enchantment where the carpets fly, the Genies live in lamps, and where love conquers all … Welcome to the Magical Adventures of Aladdin!

Brave Aladdin has fallen in love with the beautiful princess Jasmine. Eager to prove himself worthy and help his poor mother he is tricked into entering the mysterious Cave of Wonders, where undreamed of treasure is hidden. In the magic cave he discovers a rusty old lamp and becomes master of its all-powerful genie. But the wicked Sorcerer Abanazer has plans to rob Aladdin of the lamp. Can you help Aladdin and save the day?

Featuring an all star cast including The Fan-Daby-Dozi Krankies as Widow Twanky and Wishee-Washee, Gary Hollywood as our young hero Aladdin, Jackie Farrell as The wise but strict Emperor and Christian as one very hip Genie! See the hilarious antics of Johnny Laff as The Chinese Policeman and join Deborah Alexander-Young as the trusted handmaiden So Shy. Get ready to boo as Derek Lord appears as the mean and nasty Sorcerer Abanazer.

This year’s spectacular family pantomime has stunning sets, colourful costumes, lavish lights, laser and special effects, and lots of laughs, we promise you a magical carpet ride into the fantastical world of Aladdin.

It’s pure Genie – us and one for All the Family!

The fan-dabi-dozi Krankies, Ian and Janette (alias Jimmy), have become national favourites with their huge success as television and stage entertainers. Back in the 70’s they won the National Club Act of The Year and were chosen by Lord Delfont to appear in the last live Royal Variety Performance at the London Palladium. Following that, they headlined BBC’s Crackerjack, during which their catchphrase, “Fan-dabi-dozi” became nationally known. Their own prime time television shows soon followed with The Krankie Klub produced by LWT, the long running Krankies Elektronik Komic for the BBC and then KTV and Joke Machine for Border TV. Other television appearances include French and Saunders, numerous game shows, TV specials and chat shows.

Since 1980 they have topped the bill in summer seasons and pantomimes all over the UK. They are really looking forward to this Christmas back in their native Scotland. Appearing at the Pavilion is even more special as it was where Ian and Janette first met and then got married thirty years ago. They have played in pantomime seasons in every major theatre in the UK and are acclaimed in the business as masters of the art.

Nowadays they also produce and tour the world with their own cabaret shows featuring dance trouped, top-class international acts and, of course, special appearances by Jimmy Krankie!

Since making his acting debut at the age of twelve, Glasgow born Gary has become an accomplished stage and screen actor. Probably best known for playing Dominic Ramsay in STV soap High Road, his television credits also include gritty Glasgow police drama Taggart, as well as Doctor Finlay, Animal Fanatics, Skoosh and Truth for the BBC. He took the starring role in the film Boyhood of John Muir, and starred alongside Emma Thompson in Alan Rickman’s highly acclaimed film The Winter Guest. Gary is a familiar face to the Pavilion Theatre having made his first appearance as Dominic in High Road – The Stage Play, as well as Rag Woman, Rich Woman and last year taking to the seas as Jim Hawkins in the buccaneer pantomime adventure, Treasure Island. He has recently played the part of Dino Doyle in Brendan O’Carrolls fantastically funny Irish Comedy Mourning Mrs Brown, which has also enjoyed great success at The Pavilion Theatre, Glasgow.

This year sees Gary play our hero Aladdin, who knows where his adventures with the Magic Lamp will lead him!

Derek made his professional acting debut at the Perth Playhouse – Western Australia! After several years he returned to his native Ireland where he worked at the Lyric Theatre, Belfast and the Abbey Theatre, and Gate Theatre, Dublin. He then moved to London where he appeared at the Mermaid and the Royal Court Theatres.

A familiar face to many, Derek is perhaps best known and loved for his part as Glendarrochs local ‘baddie with a heart’ (!) Sneddon; a part that he has played both on television and stage in High Road. Derek has taken these roles on as he re-appears as those baddies that you just love to hate in our last Pantomimes. Last year saw him as the nasty rogue Pirate Captain Black Dog in Treasure Island a role that he had became familiar with when he played baddie Captain Hook in Peter Pan the year before. Derek now finds his feet firmly back on the ground (but for how long?) as the mean and nasty Sorcerer Abanazzer in this year’s pantomime.

Jackie makes a welcome return to the Pavilion. Over the years he has worked in many of our shows as a dancer and comedy feed to many of Scotland’s top comedians. More recently he has been in The Lex McLean Story and Parras Over The Barras. Of course he is best know as Jockie McDonald in High Road having appeared in the TV soap as well as the stage production at the Pavilion Theatre in August 2000.

Jackie now sees himself donning a rather fine (& very long!!) magnificent moustache to play the wise but strict Emperor of all China! We’re sure it’ll make quite a change from the ‘Big House’ in Glendarroch!

Born and raised in Glasgow, Deborah began her panto career as Maid Mhari in Babes in the Wood. She has also played Jilly Goose in Mother Goose and so Shy in Aladdin – so she should be more than comfortable in her Chinese attire tonight!

Other theatre work includes Alison in Trainspotting (London) and Kelly in The Street. Deborah is a familiar face to TV and recently presented I don’t believe it for STV. Deborah’s last appearance at the Pav’ saw her take to the skys as Wendy Darling in the magical Pantomime Peter Pan.

This year Deborah makes a welcome return to the part of So Shy as she prepares herself to face the advances of ‘young Jimmy Krankie’!

Ibrox born Christian, who started off in one of Glasgow’s original ‘boy-bands’ The Chris McLure Section in the swinging ‘Sixties has had a fantastic career, of which he celebrated 35 years of earlier this year at the Pavilion. He has performed alongside everybody from self-proclaimed idols The Drifters (who used to stand and watch him in the wings with yells of encouragement!) to teenybop heartthrobs The Osmonds.

Having hosted his own Music based television shows in the ‘sixties & ‘seventies (BBC’s Stramash and Scottish Television’s Christian respectively) he has also had the chance to appear alongside Tom Jones, Paul Simon, his good friend Billy Connelly and even Scotland’s own Bond – Sir Sean Connery.

After 35 years in the business Chris still holds a whole host of ambitions including furthering his acting career. He admires Robin Williams and perhaps this comic streak can be noted in his past stage performances in various pantos including Robin Hood/Babes In The Wood at the Pavilion where he also performed in Please Stay & Please Stay 2 in the theatre.

This year Christian will be appearing as one very hip Genie indeed!

And the hilarious Johnny Laff!