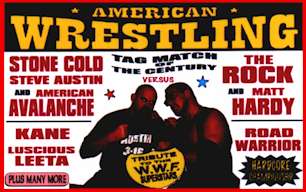 IT WAS BACK AT THE PAVILION DUE TO MASSIVE PUBLIC DEMAND!

This show was a real slammin’ tribute to Superstar wrestling!

These gargantuan characters clashed in a battle as fierce as the legendary Battle of Bannockburn, in the American Wrestling Federation’s ‘Goliaths in Glasgow’ presentation at the Glasgow Pavilion.

It was a real tribute to the WWF – all the slammin’ action, all the greatest superstars.