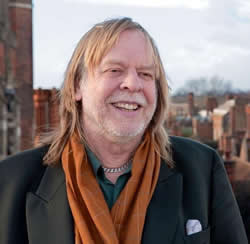 This show has now been cancelled, please contact the Pavilion Theatre box office for refunds.

Mention the name Rick Wakeman for 50 different people and ask them what he does, and you are likely to get 50 different answers! Thanks to 50,000,000 record sales around the world, which have included more than 150 record releases, 50+ DVDs, soundtracks for more than 25 films, numerous high profile television appearances including those of Countdown, Top Gear and Grumpy Old Men, and more than 4,000 world-wide concert performances of one sort or another, Rick has endeared himself to all genres and all ages, a rare accomplishment in this day an age!

These performances are very much “on-offs” and never done as a tour. The stories change on a regular basis, as does the music. If this show were in a cookery book, the instructions would simply read…..

1…..Take a large concert grand piano and seat Rick Wakeman in front of the keys.

2…..After the first piece, sprinkle in a ludicrous and funny anecdote.

These performances don’t happen very often, which is why each one is very special to Rick and hopefully for the audience as well.

This show has been cancelled