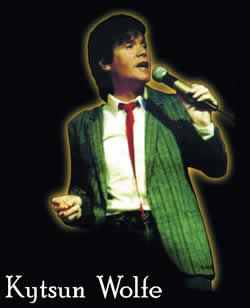 This spectacular show, starring Kytsun Wolfe as Cliff Richard, is a magical trip back to the unforgettable years (1958-1979) of pure classic ‘Cliff & the Shadows’, and features over 30 of their greatest vocal hits like Move It, Livin’ Doll, The Young Ones, Bachelor Boy, Summer Holiday, Miss You Nights and We Don’t Talk Anymore.

The two-hour legendary performance is a nostalgic Rock ‘n’ Roll experience that captivates devoted followers of Cliff and the Shadows from the minute the sounds of The Shadows echoes across the stage.

Fans can hardly believe their eyes, as Kytsun’s likeness to Cliff in the 70s is so uncanny. He not only looks amazingly like the man himself, but he also sings like him, talks like him, and captures his mannerisms with such incredible accuracy, that it is easy to forget that you are not at an actual Cliff & The Shads concert.

‘The quintessential homage to the incomparable Sir Cliff Richard & The Shadows.’
‘An uncanny resemblance and a brilliant performance Cliff would be amazed’…..Bruce Welch