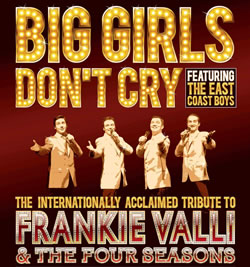 CELEBRATING THE MUSIC OF

FRANKIE VALLI and the FOUR SEASONS 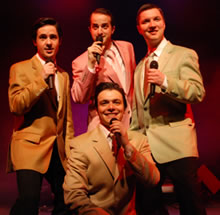 The iconic sound of Frankie Valli & The Four Seasons recreated in this “feel-good” concert. Four phenomenal singers and a fantastic live band.  A must-see show. Don’t miss it!

Valli & the Seasons had a string of hits beginning with the classic number one, Sherry in 1962. After a further run of hits, My Eyes Adored You hit number 1 on Billboard’s Hot 100 in 1975 followed by the theme song from the 1978 film Grease, which also went to number one.
This fantastic show featuring many hits from both sides of the Atlantic: ‘Sherry’, ‘Grease Is The Word’, ‘Bye Bye Baby’, ‘Stay’, ‘Silence is Golden’, ‘Working My Way Back to You Babe’ ‘Oh What a Night’, plus many, many more…. A night not to be missed.

“Is this really a British act? They’re as good as anything we’ve seen in Las Vegas!”
Cruise ship passenger, Ontario Canada

“My husband and I went to see The Jersey Boys a couple of days ago, having seen your show with a big group of friends and although we found it enjoyable, we agreed we’d much rather come and see you again. When are coming back?” Theatre goer, Hertfordshire

“This is the nearest you can get to the actual Jersey Boys themselves. The show is high quality and high octane excitement from beginning to end. A skillfully crafted evening of hits” . – Greg Dexter, Theatre Manager, The Radlett Centre