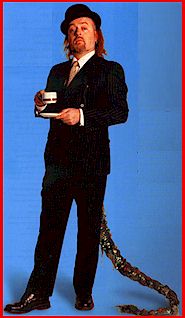 Bill Bailey was some sort of a freak. There is only one Bailey! You had to see him close up to believe. He used some long words, he did play 43 instruments, one with this own mind. He had special powers. He was part troll!

After a three month residency off-Broadway in New York and having taken London’s West End by storm, Bill is touring the UK for the first time in two years with his live show, “Part Troll”.

He has been performing his unique blend of music and comedy to packed houses as far afield as Japan, New Zealand, Aspen, Ireland, Belgium, Norway and Holland.

We hope you didn’t miss this show!

WHAT THE PRESS SAY:

“A masterpiece of high concept silliness”
THE GUARDIAN

“He is an unalloyed pleasure, a treat for the funny-bone”
THE NEW YORK TIMES

Why not visit the official Bill Bailey web site now?