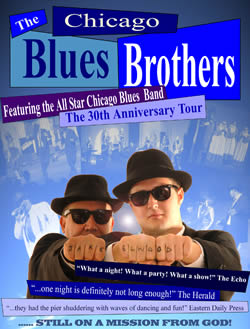 THE BOYS ARE BACK IN TOWN!

Following their massively successful and critically acclaimed SWEET HOME CHICAGO tour of 2007, THE CHICAGO BLUES BROTHERS are back with a brand new show to celebrate 30 years of the Blues Brothers phenomenon.

Jake is out of prison, and with his brother Elwood, they embark on a new mission from God – via the penguin (!). They need to make it to Chicago to raise cash to save the orphanage …. again! There is only one way they know how…. they gotta put the band back together!

Along the way they continue spreading the word of soul according to the church of rhythm’n’blues.

Backed by the hottest 8 piece band around, the stars of the show not only entertain us with Jake and Elwood, but also Aretha Franklin, James Brown and Cab Calloway!

This non-stop review is packed with over 2 hours of the very best blues & soul music from both of The Blues Brothers movies – with plenty of laughs too!

So people don’t forget…..”It’s 106 miles to Chicago, they’ve got a full tank of gas, half a pack of cigarettes, it’s dark and they’re wearing sunglasses. HIT IT!”

The Chicago Blues Brothers “had the Pier shuddering with waves of dancing and fun…the whole theatre was dancing…a show that mixed music, energy and humour in a cocktail to stir even the starchiest tail-feathers.”

‘ONE NIGHT IS DEFINITELY NOT LONG ENOUGH!’