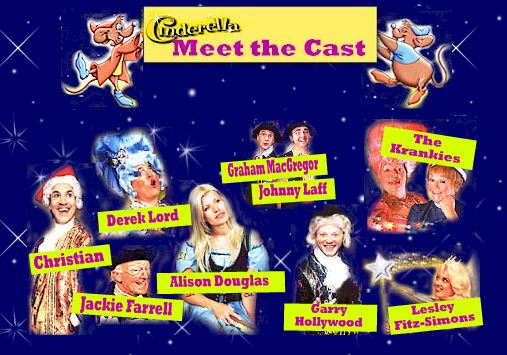 The 2002/2003 season panto at the PAVILION was everyone’s favourite….. The classic tale of CINDERELLA.

The story of a young girl called CINDERELLA who lived with her father and 2 stepsisters. While the stepsisters spent their time buying pretty new clothes and going to parties CINDERELLA wore old ragged clothes and had to do all the hard work around the house.

One day a royal messenger came to announce that there was to be a grand ball at the King’s palace, and the magic began.

The show featured all your favourites including, Wee Jimmy Krankie as that lovable character Buttons, Ian Krankie and Derek Lord as Effie and Sophie McGuff those two wicked ugly sisters.

Alison Douglas brought Cinderella to life and was guided along the way by her father Baron Hardup cunningly played by Jackie Farrell who had two stupid helpers Jammy and Dodger – Johnny Laff and Graham MacGregor.

At the palace we saw Christian as Prince Charming assisted by his loyal friend Dandini – Garry Hollywood – search for Cinderella as the clock struck midnight.

Did the Fairy Godmother, Lesley Fitz-Simons, produce enough magic to see them live happily ever after?

Who did  the slipper fit?

We all saw for ourselves, and joined in at the 2002/2003  spectacular family PAVILION panto.

In true Pavilion style the production came complete with a brand new set and costumes, lots of special effects and of course lots and lots of Pavilion laughter.