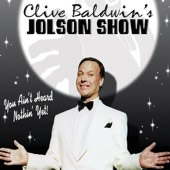 On 23rd October, 1950 the life of Al Jolson ended but the legend lives on! Now, almost fifty years on, the Jolson movement is stronger than ever; the long-standing devotion of his legions of admirers and the various Jolson Societies have contributed to this over the years, as have the continuous sales of his record albums and regular TV screenings of his biographical movies. But one man must be credited above all others for preserving the image of that wonderful entertainer – a man who has devoted his life to the presentation of the Jolson style and sound, now internationally acclaimed as ‘The Worlds Greatest Minstrel’ – Clive Baldwin.

It has been said that if ever Al Jolson came back, he would be Clive Baldwin, who is recognized by the International Al Jolson Society, among many others, as the living voice of Jolson. He most amazing fact is that he is not an imitator, but and authentic exponent of theatrical magic, who just happens to have been born with a similar voice and desire to perform in a manner uncannily approximating that of the great Al Jolson, whose prophetic catch phrase "you ain’t heard nothin yet" exemplifies Clive’s performances.