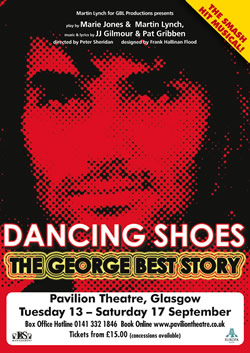 Dancing Shoes – The George Best Story, tells of the turbulent and amazing life of one of the greatest footballers the world has ever seen.

‘it was a standing ovation and had the audience singing along with the songs in the final reprise. A joyful night’
BBC Radio Ulster

'…as the show progresses, his singing, understated charm and vulnerability
bring gravity and consistency to a manically entertaining performance. The music and lyrics through-out are outstanding. One by one, the audience stands. The ovation lasts for minutes. The
woman beside me has mascara running down her face, the brute behind
screams, yahoos and wolf-whistles me towards tinnitus. All in all, not a
bad wee night out'
Vulgo 08/08/2011

'Overall this is a thoroughly enjoyable play…one that will stand the test of time.'
Belfast Telegraph 9th August

'The musical Dancing Shoes is a fitting tribute… With a fantastic score, the musical will strike a chord not only with his fans, but those who love theatre..'
Community telegraph Review 11th August

'Dancing Shoes encapsulates so much that is necessary for a good night of theatre – laughter, tears, great music, a singalong and a fantastic story well told.'
Irish News Review