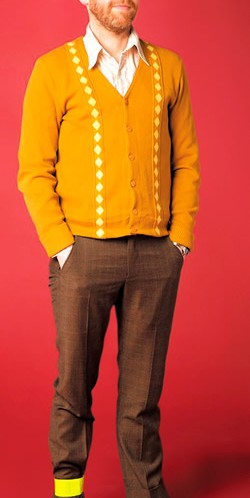 DAVE GORMAN: SIT DOWN, PEDAL, PEDAL, STOP AND STAND UP.

DAVE GORMAN is going back on the road. And when we say “on the road” we really mean it.

A lot of acts will tell you they’re covering the length and breadth of the country… but Dave’s really doing it. Dave Gorman: Sit Down, Pedal, Pedal, Stop And Stand Up will see the intrepid comedian covering the extremes of the British mainland as he travels from this land’s southernmost point to its northernmost tip, taking in the most easterly and westerly points along the way. If nothing else he’ll get to see four lighthouses.

Dave will be performing each and every night of the journey but as this is a tour that promises to reach parts of the country that other tours just don’t reach, it goes without saying that the venues will sometimes be a little unconventional too. He’ll play in 2000 seat theatres but also 30 seat village halls. He’ll be performing in a barn, the odd hotel function room and – odder still – a railway dining car.

Oh, and did we mention he’s going to do the whole thing on his push bike? The travelling, we mean. Not the gigs. That’d be silly. He’ll be standing up for those. If he still can. He’s 38 and not especially fit. 1500 miles. 32 days in the saddle. 32 nights on the stage. His Mum’s told him not to do it but he won’t listen.

Not that you need to know all this… after all, it’s not a show about the journey. Dave – whose hit Radio 4 series, GENIUS, starts its new BBC TWO incarnation on our TV screens this spring – may be widely acclaimed as the pioneer of documentary comedy but with this show he’s going back to his roots as a straight up, one-man-and-a-mic, stand-up whose “material is mercilessly sharp and original” (The Times.)

“Gorman has seen his stock rise to such an extent that he’s poised, as never before, to make the leap from cult figure to mainstream phenomenon.” Daily Telegraph

“The man is a true genius.” The Mirror.