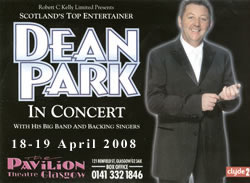 Scotland’s top entertainer in concert with his big band and backing singers.

Dean’s three decades in showbusiness have seen him performing in venues throughout the United Kingdom, but he is perhaps best known for his chart hit Wee Andy Webber’s Scottish Medley.

One thought on Dean Park in Concert