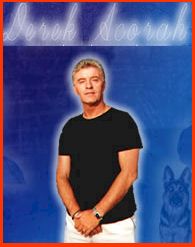 Derek is a full-time, professional Spirit Medium.  His first supernatural experience came as a child, when the spirit of his late grandfather visited him. When young Derek told his grandmother, she was not surprised, as Derek was to learn that she herself was a medium.

His early career was playing professional football with teams such as the legendary Bill Shankly’s Liverpool Football Club and the premier Australian team USC Lion.

His psychic powers were always with him, therefore on his return to England in the early 1980s he became a full time spirit medium based at his home city of Liverpool.

In recent years, Derek achieved international success with his television, radio and personal appearances across Europe, the Middle East, and in the USA.