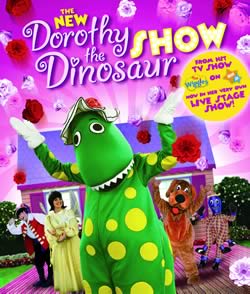 Announcing the new Dorothy the Dinosaur Show! Dorothy, one of the most endearing and best loved stars of the smash hit Nick Jr. television show ‘The Wiggles’ has now been brought to the theatre stage in her very own fully interactive live stage show!

Children worldwide have been engaged, enchanted and entertained by Dorothy the Dinosaur, Wags the Dog, Henry the Octopus, Captain Feathersword, Fairy Clare and Fairy Larissa’s adventures and songs as part of the Wiggles phenomenon, and now she hits the shores of the UK in her very own live show.

Children will enjoy meeting old friends and making new ones as they sing, dance, watch, listen and learn. Captain Feathersword will be there, you’ll shake your hips with Wags the Dog and dance a fairy ‘jig with The Fairy Dance. Along with such hit songs as Romp Bomp A Stomp, audiences will be ecstatic as the show culminates with Let’s Have A Party!

Find out lots more at www.DorothyTheDinosaurShow.com