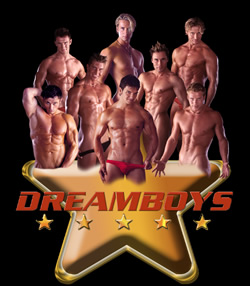 Please note that due to problems with Visa’s The Men of Las Vegas are not permitted to perform on 29th September. Rather than disappoint our customers we have replaced them with the Dream Boys!

When The DREAMBOYS first came to town, the Male Glamour Show had arrived, and was quickly recognised as the top GIRLS NIGHT OUT!, the interest and attraction has not faltered to date. – Often copied but never bettered. Launched by entrepreneur Bari Bacco in 1987, the Dreamboys are currently celebrating their 20th Anniversary show tour. Bari still owns and manages the Dreamboys, keeping their show to the highest standard, and engaging the best looking boys with firm toned defined physiques. Everytime The Dreamboys appear, thousands of screaming women drool, taking deep breaths, as the Dreamboys strip off fantasy costumes, revealing their buffed muscular physiques! Their enormous success over 20 years, has led to sell out tours, and their fame has spread to many other countries – Denmark, Dubai, Germany,Greece, Holland, Malta, Norway, Russia, Spain, Turkey, France, with repeat tours year after year. As Celebrities, the Dreamboys often make guest appearances on television shows, adding the right mix of masculine sexy glamour. Ruby Wax, Jonathan Ross, Dame Edna, Elton John, Charlotte Church are just a few of the major stars who have invited the Dreamboys onto your TV screens. The biggest highlight of the Dreamboys, was a presentation to Diana Princess of Wales, and who could forget their two dance scenes with the SpiceGirls, in SPICEWORLD the MOVIE!