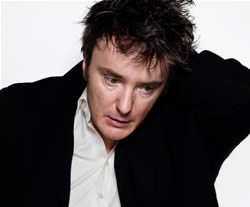 DYLAN MORAN
WHAT IT IS

Due to overwhelming demand for tickets for Dylan Moran’s WHAT IT IS autumn 08 tour a limited number of extra tour dates have been added for February 09.

DYLAN MORAN, star of BLACK BOOKS, SHAUN OF THE DEAD and RUN FAT BOY RUN is back with his new show, WHAT IT IS. MORAN’S legendary stand up rants have sold out across the world cementing this unkempt wordsmith’s reputation as one of the foremost comics of his generation.

Likened to DAVE ALLEN and labelled ‘The Oscar Wilde of Comedy’ DYLAN is unpredictable, bizarre, elegiac, often cruel but above all painfully funny. MORAN sees through the joys and disappointments of human existence with the sensibility and intense perception of a man teetering on the edge. He chews life up and coughs it out, “He’s one of a kind”. The Daily Telegraph