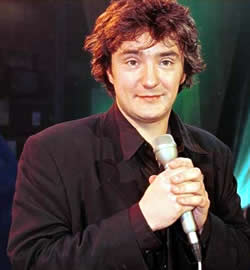 In 1993 he won Channel 4’s So You Think you’re Funny award. Three years later he won the Perrier Award for Comedy at the Edinburgh Fringe Festival.

He proved his worth as a dramatic actor in How Do you Want Me?

He played Rufus The Thief in the 1999 blockbuster romantic comedy Notting Hill, but he is probably most famous for his Channel 4 sit-com Black Books.

"A wonderful comedian, in the realm of ‘comic genius’ (not using the term lightly!). Supremely articulate, profoundly intelligent, sometimes surreal, always achingly funny. It’s not simply his material, it’s his spot-on delivery and timing that makes him so bloody good. "