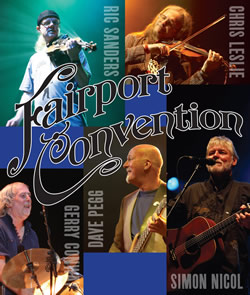 Fairport Convention has attracted huge critical acclaim and has delighted audiences for over four decades, not least on its annual Winter Tours and at its world-famous music festival at Cropredy.

Fairport Convention has won the coveted BBC Radio 2 Lifetime Achievement Award and Radio 2 listeners voted the groundbreaking album Liege & Lief ‘The Most Influential Folk Album of All Time’. The album has since gone on to win a Gold Disk for Fairport.

In 2009, Fairport Convention’s greatest strength is still live performance and this concert will present an exciting mix of the old and new. Longstanding Fairport favourites such as Matty Groves will share the bill with new songs from the band’s most recent albums.