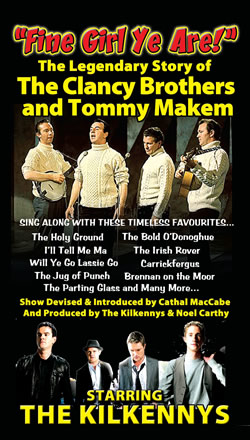 The Legendary Story of
The Clancy Brothers and Tommy Makem

The Clancy Brothers and Tommy Makem were by far Ireland’s most exciting and
successful folk group. The Washington Post described them as the four most famous
Irishmen in the world. They sprang to international stardom when they performed live
for an television audience of 72 million on the famous Ed Sullivan Show and they
went on to pack Carnegie Hall and the Lincoln Centre in New York, the Albert Hall in
London and top venues from Australia to Canada and right across the USA. Their tours
of the UK were invariably an immediate sell-out success and their songs, “The Holy
Ground”, “I’ll tell me Ma”, “Carrickfergus”, “Will Ye Go, Lassie?” and all the others sold
millions of records all around the world.

Following an unprecedented four month engagement at the famous Gleneagle Hotel
in Killarney, “FINE GIRL YE ARE!” holds back nothing as it tells the unvarnished
and dramatic story of the Clancy Brothers and Tommy Makem, their lives and their
loves, their highs and their lows, the good times and the heartbreak. And along the way
it includes all their greatest hits, brought back thrillingly to life by Ireland’s most exciting
young folk group, THE KILKENNYS.
This foot-tapping, hand-clapping, singalong evening recreates the unique magic of the
Clancys in an exciting and often poignant theatrical experience which invariably ends
with a unique singing, standing ovation.

“FINE GIRL YE ARE!” brings the Clancy Brothers and Tommy Makem back to
life!

2 thoughts on Fine Girl Ye Are! - The Kilkennys