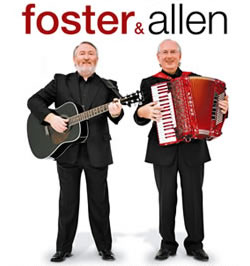 Foster & Allen is an Irish duo formed in 1975 by Tony Allen and Mick Foster, performing a blend of easy-listening and folk music. Their more than twenty albums include The Rambles of Spring, A Bunch of Thyme, Maggie and After All These Years. The band first toured the United Kingdom in 1983 and have later been to Canada, South Africa, the USA, Australia, New Zealand and Tasmania.

Accordionist Mick Foster, born in December 1947 in the village of Ballymore Eustace in County Kildare, was three times the winner of the All Ireland Accordion Championships, the first time in 1964, at age 17.