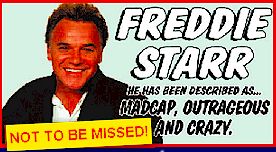 Freddie Starr has been described as madcap, outrageous and crazy! He’s a one-man phenomenon that has graced both the stage and television screen and is the stuff of which legends are made.

Starr is the man who gave us such outrageous headlines as, ‘Freddie Starr ate my hamster!’