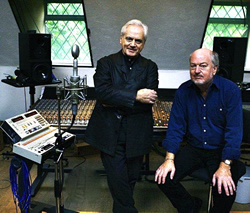 They joined forces in 1959, initially as members of the local Largs based band, The Bluefrets. They began writing original material for the band and also wrote "Mr Heartbreak's Here Instead" for Dean Ford and the Gaylords (later to become Marmalade). Their first recognition came in 1968, when they were signed by The Beatles to write for Apple Records' musicians such as Mary Hopkin ("Sparrow", "The Fields of St. Etienne", "International", "Heritage", and "Jefferson").

There was a rare one-off single issued on UK Polydor 56093 in 1967; "Trees" b/w "In The Crowd" issued under the name Gallagher-Lyle, which preceded their success as songwriters at Apple.

By 1970, they were original members of the newly formed McGuinness Flint, and penned the UK Singles Chart Top 10 hit singles "When I'm Dead and Gone" and "Malt and Barley Blues", both produced by Glyn Johns.

In the wake of the singer-songwriter phenomenon, they formed the duo Gallagher and Lyle in 1972, recording four albums: Benny Gallagher and Graham Lyle, Willie and the Lapdog, Seeds, and The Last Cowboy again under the auspices of Glyn Johns. But it was not until their fifth album, Breakaway, in 1976, that they charted again, with the hits "Heart on My Sleeve" and "I Wanna Stay with You", both of which reached Number 6 in the UK Singles Chart. Art Garfunkel's cover of "Breakaway" was also a hit at the time, and Don Williams took "Stay Young" to No. 1 on the U.S. country chart, which saw the song receive in excess of one million airplays on American radio. The duo also penned and performed "A Heart in New York", which was later performed by both Simon & Garfunkel and Garth Brooks in their concerts in Central Park, New York to audiences of 500,000 and 750,000, respectively.

Their mellow sound was only briefly in vogue, and elusive further success (another minor hit in the UK was "Every Little Teardrop") prompted their split in 1979.

Lyle formed a new songwriting partnership with Terry Britten, and their hits included "What's Love Got to Do with It?" and "We Don't Need Another Hero" for Tina Turner; and "Just Good Friends" for Michael Jackson. He also recorded an album with Tom McGuinness, credited to Lyle McGuinness: Acting on Impulse (1983).

Gallagher spent nine years as a founding director and the first chairman of the Performing Artists Media Rights Association (PAMRA), which saw £20 million of equitable remuneration paid through to UK performers under his stewardship. He has been deemed a companion of LIPA, Sir Paul McCartney's school of performing arts in Liverpool, and spent a brief spell as bassist and vocalist of The Manfreds, which included five of the original members of Manfred Mann, featuring both lead singers, Paul Jones and Mike D'Abo, in the same band for the first time touring the UK, Europe, the Middle and Far East, Australia and New Zealand.

Gallagher is currently a featured artist and co-owner of OnSong (an internet based record label) with Derek Wilson. Gallagher has released two albums as a solo artist – Benny Gallagher on Stage and more recently, At the Edge of the Wave.

After their successful homecoming concerts in Largs in 2010,Benny and Graham are looking forward to taking the show to other venues in Scotland in 2012

6 thoughts on Gallagher and Lyle