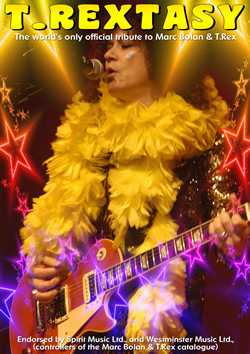 For many, Marc Bolan was the very first superstar of the 1970s. From 1970 to 1976 he had written 15 Top 20 hits, and between 1968 and 1974 had notched up 9 Top 20 albums. With iconic glam anthems and rock classics including songs such as 20th Century Boy, ‘Solid Gold Easy Action’, Ride A White Swan, Metal Guru, Jeepster, Get It On, Hot Love, Children of the Revolution, and many others, Bolan’s unique style, even now, well over 40 years later, has the power to bridge the gap of generations turning all ages both young and old onto what Bolan termed ‘Cosmic Rock’. Marc Bolan, with his band T.Rex, was one of the most flamboyant and charismatic characters of the original glam rock era.  Sadly, Marc’s life was cut short after a car accident and died in September 1977 – he was still only 29 years old.

One song in-particular that has become an iconic mini-anthem in the world of popular music reached No.13 in June 1976, and has since been used in many advertising campaigns, television shows, and most notably in the feature film Billy Elliot.  That song was called ‘I Love to Boogie’, a slice of pure Rockabilly-Bolan that is so memorable that is has now become one the best loved Bolan tracks in the UK.

In 2000, T.Rextasy were approached by the film directors of Billy Elliot to play at their prestigious film launch premiere party in London’s West End, where the band played a 1hr performance to the likes of Julie Walters, Jamie Bell, Kathy Burke, Hugh Grant, and other specially invited guests.

Unbelievably, it is now 40 years since the release of the single ‘I Love to Boogie’, which sounds as fresh today as it did all those years ago. T.Rextasy celebrate the song’s anniversary in their current 2016 ‘I Love to Boogie Tour’ which is currently making its way around the UK throughout the year!

Marc Bolan is now recognised as the original innovator of the 1970s glam-rock scene, and with T.Rextasy, who June Bolan (Marc’s wife), after seeing Danielz and the band perform at Wembley Arena, commented “If there was anyone to follow in Marc’s shoes, I’d like it to be you!” now carrying the baton, everyone can once more enjoy the spirit of a T.Rex concert!

T.Rextasy have now been gigging around the world for over 2 decades, a career that ironically out lives Marc’s very own T.Rex.  The band are now accepted as the world’s only official live tribute band dedicated to Marc Bolan & T.Rex, and the only band endorsed and approved by Marc Bolan’s family, estate, original ex-members of T.Rex, and Bolan’s catalogue management.  Due their passion, musical ability, longevity, and attention to detail, the band is consistently described by many as ‘legendary’ and ‘beyond the boundaries of tribute’.

They have, with their Marc Bolan doppelganger lead vocalist and lead guitarist, Danielz, signed with Columbia Records, Madman Records, and Demon DVD, won the accolade of ‘Best Live Tribute Band in the UK’ on BBC 1’s ‘Battle of the Fantasy Bands’, filmed for the BBC TV ‘Arena Special’, toured around the world from Europe to Japan and have performed at most of the Arenas in the UK. They have played alongside many of the 1970s original contemporaries such as Wizzard, Cockney Rebel, Slade, and Ian Hunter, to name a few. In September 2007 they played to 40,000 at the BBC Proms Night at London’s Hyde Park, and headlined their own sell-out concert at the Shepherds Bush Empire with their special guests Marc Almond, Gloria Jones, Clem Burke (drummer with Blondie), Linda Lewis, and Shakin’ Stevens.  In September 2012, T.Rextasy returned to the Shepherd’s Bush Empire on request by the PRS (Performing Right Society) to perform and hold court for a 35th commemorative concert for Marc Bolan where their special guests included Boy George, Steve Harley, Sandie Shaw, Noddy Holder, Lynsey De-Paul, Tony Visconti (Bolan’s producer), Glen Matlock (Sex Pistols), Alvin Stardust, and others.

The band have also had accepted invitations from ex-members of T.Rex such as Mickey Finn, Marc’s son Rolan Bolan, and Bolan/Bowie producer Tony Visconti, to play alongside them in past special Anniversary concerts.  Dino Dines, a long-time member of T.Rex, actually joined T.Rextasy and remained with them until sadly passing away a few years ago….the list goes on…

Danielz was offered the first ever publishing deal to a tribute artist to write a book about his ‘life in a tribute band’. The book, entitled ‘The Spirit of Marc Bolan’, was issued by Wymer Publishing with a world-wide distribution in 2012.

In May 2015, Danielz was called personally by Marc Almond to perform the Bolan hit ‘Hot Love’ on the final date of his sell-out tour at Shepherd’s Bush Empire.

June 2015 saw the release of ‘Blue Moon Juice’ – a follow up CD album released by T.Rextasy on Madman Records that contained both live and studio recordings on which Tony Visconti (Bolan’s producer) commented “the vocals are superb and the band sound great!”

T.Rextasy play homage to Bolan’s biggest hits, such as ‘Ride a White Swan’, ‘Jeepster’, ‘Telegram Sam’, ‘New York City’, ‘Debora’, ‘Teenage Dream’, ‘Hot Love’, ‘Telegram Sam’, ‘Metal Guru’, ‘The Groover’, ‘20th Century Boy’, ‘Truck On Tyke’ ‘Children of the Revolution’, ‘Get it On’, and of course ‘I Love to Boogie’.  The band play totally live recreating the music, performance and excitement of those heady and outrageous glam-rock days, without resorting to backing discs of any kind, and a massively enjoyable time for all ages. If you want to know exactly what a Marc Bolan rock’n’roll concert felt like in the 1970s, this gig is for you!

For more information go to: www.facebook.com/t.rextasy

T.Rextasy – awarded ‘The Best Live Tribute Band in the UK’ by BBC1 TV.

‘They’re the closest you’re ever going to get to the real thing’
~ Bill Legend (original T.Rex drummer)

‘T.Rextasy is the tribute act who breaks all the rules by being bloody brilliant.  Danielz is an exact replica of Marc, he’s uncanny.
~ The Independent on Sunday

‘Danielz is a curator of Bolan’s life, a perfectionist protector of the legacy – T.Rextasy play with a poignant, flamboyant skill.’
~ The Observer

“Danielz is more than a career lookalike.  Here we have a serious guitarist with the animal grace of early Bolan and the clear un-equivocal love of the music”
~ The Stage

‘Get it On’ with T.Rextasy – Tickets

‘Get it On’ with T.Rextasy – Comments

‘Get it On’ with T.Rextasy – media

‘Get it On’ with T.Rextasy – COVID Information