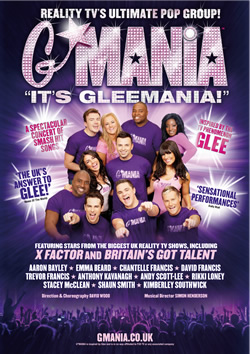 FORGET
the X Factor tour for now – reality TV stars of the recent past will be taking
to the stage on their UK Tour and it’s promising to be a romping music fest.

“THE UK’S ANSWER TO GLEE” – News Of The World

Eleven
of the biggest TV talent stars of recent years, have united for the first time
to tour a concert in celebration of the US TV phenomenon Glee.

The “ultimate pop group”, G*Mania comprises 11
of the biggest stars of The X Factor, Britain’s Got Talent, Pop Idol, Pop Stars
– The Rivals, Grease Is The Word and Last Choir Standing.

The
show is a high-octane, high-on-life, feel-good production which showcases the
vocal talents of the singers while celebrating the songs and stunning
choreography of the hit TV show Glee. As well as much-loved mash-ups, they will
be bringing incredible music from past eras back to life, including the hits
Don’t Stop Believin’ and Gold Digger.

Producer
and musical director Simon Henderson, who has sold over eight million records
and is currently working with major artists including Robin Gibb from the
legendary Bee Gees and Peter Andre, says: “These reality TV shows have
discovered some exceptionally talented singers in recent years. We have
hand-picked 11 of the very best of them to create an outstanding super pop
group for G*Mania.

“These
are all finalists who were taken to the hearts of the British public, who voted
for them in their millions. These kids are seriously talented and the public
are loving seeing and hearing them again.

“Gorgeous
and oozing with talent, they were all stand-out stars on the biggest shows on
British TV, and as a group they truly shine.”

I attended the
8pm performance of G*Mania at Newcastle Theatre Royal and I would just like to
let you and the cast know how much my family and I enjoyed the show.
What a fabulous couple of hours of quality entertainment! The guys all
performed spectacularly. I was delighted at the talent you have managed to put
together as each cast member excelled themselves and the whole show was great –
the varied audience of all ages seemed to enjoy it. Highlights for me (of which
there were many) included David’s performances (Last Choir Standing) – he is
definitely a World class act, and someone to watch for in the future. Also
Kimberley was great and Rikki who was note perfect. Local lad Aaron received a
proper ‘Geordie’ reception by the home crowd too and his performance with Rikki
was a crowd smasher. I was upset that the evening passed so quickly and could
have sat for another hour or more!
These guys are possibly viewed as reality TV stars ‘who weren’t winners’ but in
my eyes they are all winners.
I was lucky enough to meet some members of the cast after the show and they
were all very enthusiastic and exceptionally motivated and genuinely delighted
to be given the chance to perform in G*Mania.
All in all, in my opinion, this is one show not to be missed and I would love
to go and see it again.

The
boys include Rikki Loney from The X Factor in 2009, who made it all the way to
the live shows and the final 10; 18-year-old Shaun Smith, a finalist on
Britain’s Got Talent; chart- topping Anthony Kavanagh who was the runner- up on
Grease Is the Word; Andy Scott Lee, who appeared in the second series of Pop
Idol and enjoyed chart success with his brothers in the band 3SL; and the
incredible voices of brothers David Francis & Trevor Francis who made Take
That’s Rule The World their own as lead singers of the group Revelation in Last
Choir Standing.

The
girls include X Factor star Stacey McClean who first appeared in S Club
Juniors; Emma Beard who came within a whisker of joining Girls Aloud in Pop
Stars – The Rivals; Kimberley Southwick, also a big X Factor contender and
Chantelle Francis who’s incredible vocals shone as one of the leads in
Revelation Choir on Last Choir Standing.

“I WAS BLOWN AWAY BY G*MANIA, THE VOCALS WERE
STUNNING, THIS IS A VERY EXCITING SHOW TO BE TOURING BRITAIN” – Yvie Burnett ( X Factor Vocal Coach )

Between
them, more than 78 million viewers watched their journey to become pop stars,
they have received 13.5 million hits on You Tube and sold more than 2.5 million
records.

G*Mania
is proving to be a huge smash hit success story as tickets are selling out all
over the country.