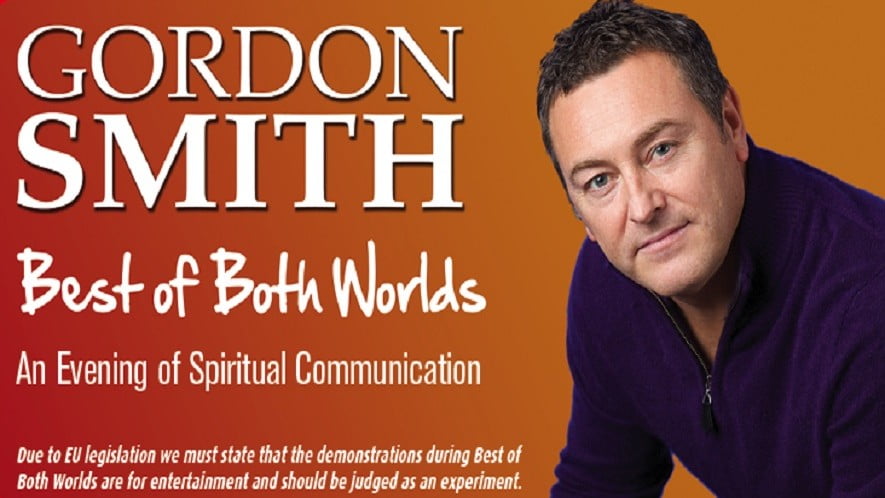 Gordon Smith’s extraordinary abilities have brought comfort and healing to thousands of people worldwide. A former presenter on Living TV’s Most Haunted, as well as a regular guest of ITV’s This Morning sofa, his skills and integrity has attracted a variety of celebrities and entertainers all over the world he has also been the subject of several documentaries. Keen to validate his work, Gordon has regularly been tested by scientists, historians and parapsychologists he is an award winning author and spiritual teacher. As a fellow Glaswegian this world-renowned Medium makes a welcome return to his home city and the Pavilion Theatre in October with his Best of Both Worlds expect lots of laughter, amazement and high spirits.

What the media has to say about Gordon Smith

‘There is nothing ambiguous about the messages Gordon conveys. Hailed as Britain’s most accurate medium.’

‘He has the reputation of being Britain’s best, most detailed medium…it is the sheer detail that Gordon goes into that underpins his reputation.

Gordon Smith is down-to-earth about his heavenly talents.’
The Sunday Telegraph magazine

‘It’s impossible not to warm to Gordon Smith. He is one of the country’s most successful mediums.
Daily Express

‘Gordon’s gift was to soothe the grief of the heartbroken, to give them hope.’
The Guardian

‘There’s no doubt for me he’s the real deal. His accuracy had the hairs standing up on the back of my neck.
Woman’s Own