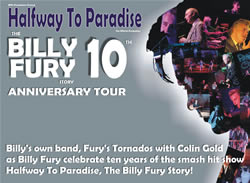 It’s been ten years since Fury’s Tornados donned the suits once more, tuned up their instruments and stepped back out onto the stage to perform the songs that have bought so much pleasure to so many fans across the years….
"They are, of course, the songs of Billy Fury. An icon of British pop, Billy was a true Rock ‘N’ Roller. During the 60’s he sold more singles for Decca than the Rolling Stones, and amazingly scored more hit 45’s in the 60s than the Beatles! As Fury’s Tornados, we were Billy’s longest serving band, backing him throughout the 70s. After Billy ceased touring through ill health, we split and went our separate ways, convinced that no one could ever come close to sounding or looking like our old friend, colleague and boss".
In 1996 a young man appeared on national TV singing "Halfway To Paradise".
That man was Colin Gold and his voice and manner were good – very good… Of course, no one could ever replace Billy, but Colin has an uncanny natural vocal ability that both Fury’s Tornados and fans alike adore. "A voice blessed from Heaven" is how Brian Matthew described Colin when introducing the boys in 1999. The rest, as they say, is history. After some months rehearsing, the show was born and on February 14th 1997 "The Billy Fury Experience" hit the stage.
The first show at the Beck Theatre in Hayes was completely sold out! Over the last ten years, the show has won critical acclaim and played to capacity audiences time after time. The show is acknowledged as being the most authentic accolade to the original ‘Pop Idol’. "Billy’s long time partner Lisa Voice introduces the show and sums up beautifully the bond that built up between Billy, Lisa and us".
"Billy Fury was unique – devastatingly handsome. Girls went wild for him.
Guys wanted to be him. We were lucky, very lucky to have been a part of his history. Each night that we perform his songs again we feel privileged to do so. Our aim over the last ten years has been to keep the memory and spirit of Billy alive whilst hopefully bringing his music to new fans too. We have had a fantastic time so far, and with the talents of Colin Gold at the forefront of the show, rest assured we’ll keep on rocking till we drop!"
Fury’s Tornados. 2006.
As Billy Fury’s band, we had dreamed of performing his hit songs and recapturing the memories of those times before his tragic death in 1983, whilst bringing the sound of a British musical icon to a new audience who perhaps cannot remember those heady days. Of course, no one could replace Billy, with his smouldering good looks and awesome stage presence, so it’s a dream that remained that for many years… just a dream.
Then, by chance, we saw a performance on televisions "Stars In Their Eyes", by a young man called Colin Gold. We were immediately struck not only by Colin’s close physical resemblance to Billy, but also by his vocal quality. That combination prompted us to approach him with the seed of an idea. After several meetings and many rehearsals, that chance viewing of a TV appearance culminated in the finished production which is…HALFWAY TO PARADISE.
After 20 years…Fury’s Tornados perform again…

All lip curling, smouldering sexiness, Billy Fury was the British Elvis and the most complete cool cat Rock ‘n’ Roller ever!
During his life, this shy, unassuming lad from Liverpool….
– Sold more records for Decca than any other artist – including The Rolling Stones!
– Had 28 hit singles between 1958 and 1984
– Spent more than 280 weeks in the charts
– Scored more hit singles in the 60s than The Beatles!
Born April 17th 1940 in the Dingle district of Liverpool as Ronald Wycherley, Billy’s early years were fraught with illness leaving him with a weak heart. In spite of this, on leaving school he became a deckhand on the Mersey tug boats, where he became aware of the New Rock ‘n’ Roll and Rythmn ‘n’ Blues music that the sailors would bring from across the Atlantic. With his wages he bought himself a guitar, learned a few chords and would play and sing to his fellow shipmates.
In October 1958, impresario Larry Parnes’ latest show was playing the Birkenhead Essoldo Cinema, so young Ronald made the trip across the water in the hope of interesting the star of the show, Marty Wilde, with some of his self written songs. The unlikely happened and the budding song writer against all odds found himself auditioning his compositions to Larry Parnes himself, who, legend has it, pushed him onto the stage re-christening him "BILLY FURY".
Parnes took Billy under his management and immediately secured a recording contract with Decca. On the 26th November 1958 Billy went into their West Hampstead studios and recorded his own composition "MAYBE TOMORROW". The first of twenty six top 50 singles he was to have with the company ensuring his place in musical history

One thought on Halfway to Paradise - The Billy Fury Story