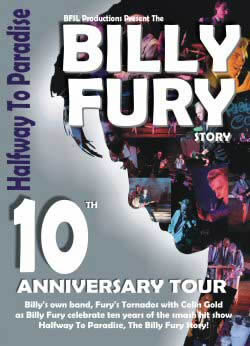 As Billy Fury’s backing band throughout the 70’s, Fury’s Tornados had
dreamed of performing his hit songs and recapturing the memories of those
times before his tragic death in 1983.

Of course, no one could ever replace Billy Fury, whose legacy includes the
record of 280 weeks in the British Charts and the title of Deccas biggest
selling artist – ahead even, of The Rolling Stones! With his smouldering
good looks and awesome stage presence, they thought it would be impossible,
and so it’s a dream that remained that for many years… just a dream.

Then, after seeing a performance on televisions “Stars In Their Eyes” by
Colin Gold, they were immediately struck not only by his close physical
resemblance to Billy Fury, but also by his vocal quality. That combination
prompted them to approach him with the seed of an idea which culminated in
the finished production, which is… ‘Halfway To Paradise, The Billy Fury
Story’

Together, they now re-create the sound of a British musical icon to existing
fans and new audiences alike, including those who perhaps cannot remember
those heady days. They take their audience through a musical and visual
journey re-kindling memories unlike any other show can. The emotions and
memories that putting this unique show together has evoked, prompted Fury’s
Tornados to dedicate the show to the memory of a much loved man, “Our singer
and friend, who must never be forgotten”.

They include all Billy’s hits in the two hour production, including….”I
Will”, “Halfway to Paradise “, “It’s Only Make Believe “, “Like I’ve Never
Been Gone”, “Maybe Tomorrow “, “Colette”, “A Thousand Stars “, and many,
many more. Featuring some of their own personal footage of Fury’s Tornados
performing with Billy, the stunning visual aspect of the show combines live
video with archive footage projected on a huge screen spanning the width of
the stage.

It’s true to say that the entire show is a wonderful and fitting compliment
to the great man himself, created by people who were regarded by Billy Fury
as “his brothers”.