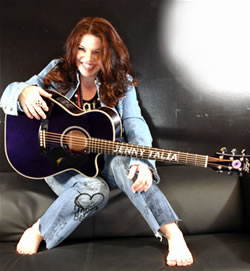 Due to poor ticket sales, the promoters have cancelled the whole tour. We apologise for any inconvenience.

From the Outback of Australia comes a new brand of comedic talent that will blow your mind. Jenny Talia from Australia is a blond haired, blue-eyed, fast-talking, ball busting Sheila with an attitude, and thats on a good day!

This feisty little woman has a voice larger than herself and an arsenal of material to make any woman proud and every bloke piss themselves laughing. Coupled with an amazing talent for writing songs that mirror the ridiculous realities in life, Jenny delivers a fresh approach to comedy as never seen before.

Jenny Talia’s self titled debut album is packed full of songs which depict a woman’s hilarious point of view. Everything is covered, from puberty to sexual exploration to the beginnings and endings of love and everything in between. Me & Pamela Lee and These Boobs give us a peak at what Jenny’s had to endure as a well-endowed woman of the world. Songs like Deja vu and the Bastard Song enlighten the audience to Jennys tried and blue relationships. Oh yes, you can expect that a woman of such exceptional experience has quite a lot to say, leaving no stone unturned as she explores the wonders of sex-ploration in Take It Like A Man and Hidden Spaces.

Folks, theres a little bit of everything for every one. Jenny Talia is a proud advocate for equal rights so not only will she take the piss out of you, but she doesn’t mind taking it right out of herself as well. Never before have you seen anything like her and surely she is something youll not soon forget!