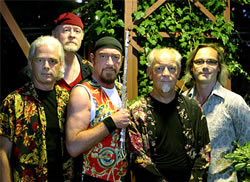 This show is now SOLD OUT!!

Dunfermline-born Ian Anderson formed Jethro Tull in 1968. They went on to become one of the most successful and enduring acts in British rock history, with landmark albums such as Aqualung, Thick As A Brick and Too Old To Rock ‘n’ Roll, Too Young To Die.

Jethro Tull have sold some 60 million albums worldwide and performed over 2,500 concerts in 40 countries.

How did you get the name Jethro Tull?

Back in February, 1968, we had many different names which usually changed every week, since we were so bad that we had to pretend to be some new band in order to get re-booked in the clubs where we aspired to find fame and fortune. Our agent, who had studied History at college, came up with the name Jethro Tull (an eighteenth century English agricultural pioneer who invented the seed drill). That was the band name during the week in which London’s famous Marquee Club offered us the Thursday night residency. So it stuck. Is it too late to change? I thought so.

Who are the current band members?