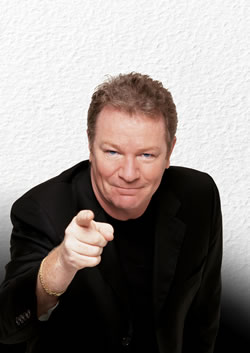 Jim Davidson is firmly established as one of the country’s most popular entertainers. He received an OBE for his services to charity and has three coveted ‘Showbusiness Personality of The Year’ awards from the Variety Club of Great Britain, the Grand Order of Water Rats and Comic Heritage.

Since emerging from television’s New Faces he has gone on to star in and host a series of prime time TV shows including BBC TV’s The Generation Game and Big Break. His success also embraces videos, DVDs, CDs and sell-out tours of his live adult shows. His theatre production credits include hit West End shows and smash-hit family pantomimes at major venues throughout the UK and his best-selling autobiography Close To The Edge was published by Ebury Press.

His top-rating prime-time stand up series Jim Davidson on The Road was recently screened on BBC One and last Summer he played over 50 UK dates in his stand-up adult show. He returned to Dubai in the Autumn to produce and direct the first Dubai Comedy Festival. His latest DVD Jim Davidson – Full On Live was released in November and he is currently in the process of writing a book about the exploits of being on tour. He has recently finished working on Colour Me Kubrick, a film with John Malkovich, which makes its international premiere at the prestigious Tribeca Film Festival, New York this Spring.

In 1999 he launched and became Chairman of the British Forces Foundation charity.

The Comic Master, Jim Davidson at his most controversial, outrageous and hilarious in his x-rated, smash-hit, stand-up show…Back by public demand.

"Britain’s greatest living stand-up comedian….If the best comedy is about taking an audience out of it’s comfort zone, then that is precisely what he does." –
THE INDEPENDENT.