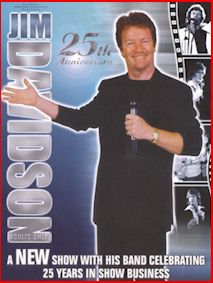 Jim Davidson returned to Glasgow’s Pavilion Theatre with a great new show of the true blue variety. With loads of laughs from one of Britain’s most well known entertainers!

Jim Davidson, one of the UK’s favourite funnymen, undertook his 25th anniversary tour when he embarked on a series of live dates in the spring of 2002 in his hilarious adult stand-up show.

The fast-talking, controversial comedian treated his audience to the bluest, the funniest and the most outrageous comedy routine in the business.