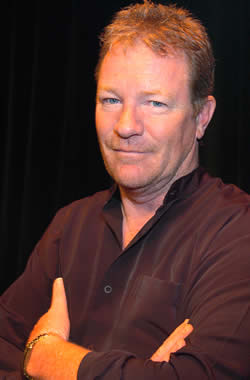 Comic master Jim Davidson rips into all manner of forbidden topics as he takes his x-rated stand-up show Jim Davidson – Live and Uncut on tour. This is Jim at his most controversial, outrageous and hilarious. Come and watch a true professional at work ….. adult humour at its very best.
Jim is firmly established as one of the country’s most popular entertainers. He received an OBE for his services to charity and has three coveted ‘Showbusiness Personality of the Year’ awards from the Variety Club of Great Britain, the Grand Order of Water Rats and Comic Heritage.

His top-rating prime-time stand up series Jim Davidson on The Road was recently screened on BBC One and last Summer he played over 50 UK dates in his stand-up adult show. He returned to Dubai in the Autumn to produce and direct the first Dubai Comedy Festival. His latest DVD "Jim Davidson – Full On Live" was released in November and he is currently in the process of writing a book about the exploits of being on tour. He has recently finished working on Colour Me Kubrick, a film with John Malkovich, which makes its international premiere at the prestigious Tribeca Film Festival, New York this Spring.

In 1999 he launched and became Chairman of the British Forces Foundation charity.

"Jim Davidson is very funny … A comic who has timing down to a fine art …..An on-stage, international perfectionist."

"Davidson knows about breaking boundaries and this is his most graphically explicit showcase to date."

"He has entertained soldiers across the world and yet, as a comic, he still takes no prisoners at home."

"Last week Jim Davidson came, he saw, and he conquered a sell-out audience."

"There are no prisoners on the front row of a Jim Davidson concert – everyone is a target no matter the age, disability, or sex. This show was no exception as Jim mercilessly tore into certain individuals. He calls the first few rows ‘suicidal seats’!"

"Jim was both topical and informative….The show is classified as adult humour and had them rocking with non-stop laughter."