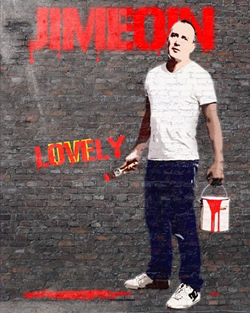 " Jimeoin serves up comic observations as if they were amuse-bouches; intricate, exquisite and flavoursome tidbits that don't seem especially filling – until you find you've unwittingly wolfed down enough of them.

He serves them up with no fanfare, barely raising his voice above the level of a discreet conversation. But that seems to befit the small scale of his material, which microscopically analyses the minutiae of universal behaviour that no one else has previously thought to examine.

Topics as minor as deciding whether to wear a coat outside or the movement of his toes provide enough material for several minutes of trivial but amusing stand-up, inviting us to laugh at our own unnoticed foibles. Some of his ideas, such as how we seem to store memories spatially, seem so accurate and revelatory as to be almost like pioneering psychological research.

The subtlety of the writing extends to the performance. Even physical pieces, such as his impressions of various bird species, is done with minimal movement, just enough to get his point across.

His analytical approach leads him to examine how we react to his material, emitting a hearty laugh, then nothing, as we silently demand more to sate a voracious appetite for witticisms. Although that also says a lot about his performance style – he doesn't create a wave of energy, but absorbs us in a warm blanket of comforting humour, occasionally tickling us with a punchline. The ‘lovely' of the title is certainly an apt description…."

One thought on Jimeoin - Lovely