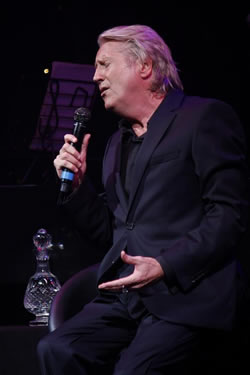 An Intimate Evening with
JOE LONGTHORNE
(A Man & His Music)

This talented artist began his career over Four decades ago with appearances on Junior Showtime, followed by a grounding on the tough Northern club circuit.

His big break came in 1981 when he was a finalist on London Weekend Television's Search for a Star – this lead to appearances at the London Palladium with Bob Hope and The Talk of the Town. A short time later, Joe received the Variety Club of Britain award as Most Promising Artiste of the Year. Television specials in the UK and USA followed.

Joe's repertoire of voices is endless and includes hundreds of the world's top singers, however, he is perhaps best known for his impersonation of Shirley Bassey who has commented, "Joe can do me better than I can do myself".

During his career, Joe has received gold and platinum discs for his albums, enjoyed sell-out concerts at the Royal Albert Hall, as well as touring Australia several times.

Now, Joe is looking forward to new challenges, new songs to sing and new audiences to thrill. A Man & His Music…..

Joe’s show is most certainly still a very warm and intimate “Joe” show and we are still treated to his wonderfully interesting and very clever humour, recounting his experiences through life, little stories and original views and observations, there are impressions by the hundreds, all of Joe’s “guests” drop in from dear old Arthur Askey to Sir Norman and the hilarious Dickinson’s Deal to the Black and White Minstrels, then of course all the greats are there from the Rat Pack to Diamond and Manilow and Dame Shirley which people probably associate mostly with Joe, I have to admit to still being totally amazed at how he just slips his jacket off his shoulders and totally changes into the Dame herself. I marvelled at the total genius of his tribute to Judy Garland which he gave a whole song to instead of just slipping her in during a song. His mimicry skills are that good he has sometimes sold himself short I feel, and with doing a whole song as Bassey and then Garland he is doing himself full justice, it is all too easy to overlook the genius and skill he puts into all his impressions.

Close your eyes and you think you are listening to Tony Bennett but as Joe says “it’s still me love”. The man is a complete marvel and so talented you can almost see him bubbling over on stage, there is so much “performance” he wants to give his audience, even after two hours he still has more to give. On Tuesday night he even gave us a snippet of Michael Jackson, complete with a wonderful moonwalk backwards across the stage, the King of Variety and Entertainment gave us the Prince of Pop……….fantastic to see Joe is this very relaxed and happy mood….priceless.

Joe is flying high but it is a certainty that the success of his new show is going to take him higher and with the West End beckoning later in the year together with a season at The Grand Blackpool and a very extensive tour and cabaret dates at some great venues, the man is bound to be going places, Vegas hopefully if that is still on Joe’s list. I would say “back on TV” but to me Joe is far too good for TV at present.

I must not close this article without mentioning a very entertaining and special man, Mr Leye D Johns who is appearing with Joe and who opens the show for him every night. He is already a massive success in Blackpool and has received rave reviews for the 2010 summer season he did with Joe on the North Pier. Leye gives a new and deep meaning to the word “versatile” and is the king of the Ad Lib….. Singing, Dancing, Audience participation…. the man does everything and always manages to find a “special friend” to chat to in the audience. He is a very nice man and he has certainly been taken to heart by all of Joe’s fans, a lovely guy you will always find him around in the interval chatting and always happy to pose for a photo or sign an autograph. Leye is also a man going places career wise it is very clear to see and thoroughly deserved.

Well, there it is “A Man and His Music” a very special show with two very special men, guaranteed to leave all of us asking for more at the end of the evening.