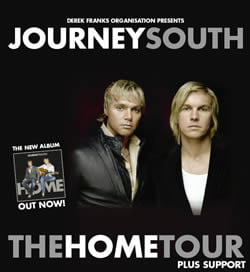 Carl started playing pubs and clubs on his own doing covers at the age of 18. Andy then decided that he wanted to join in and the band was born.

Having gigged a lot round the North East they also entered a lot of battle of the band competitions and while performing in one in Romford they were spotted by a manager who suggested they should come down to London and try to make it there.

5 years ago they all left their jobs, Carl quit his plumbing apprenticeship with only 3 months before the end, bought a caravan on their Visa card and set off for London. This is the time when they decided to change their name to Journey South as that was what they were intending to do.

The culmination of all their hard work was a showcase that their management had organised in April 2000.

The duo stayed on in London until the following Christmas but had to admit defeat after having put all their money into trying to make it they were over £20k in debt. The pair headed back up to Middlesbrough to resume normal lives.

After entering the X-Factor in 2005, Journey South made it straight through to the final. The guys proved they could successfully turn their hands, or rather voices, to any song and make it completely their own.

On the show Journey South performed big stadium anthems by the likes of U2 and Bon Jovi, classic ballads from Robbie Williams and Elton John and of course their unforgettable take on Roberta Flack's "First Time Ever I Saw Your Face."

After narrowly missing out on winning the show, Journey South were immediately snapped by Simon Cowell and signed to BMG.

Andy and Carl went on to release their platinum selling self-titled debut album which entered the UK Charts at No.1, as well as announcing a nationwide tour taking in dates from Edinburgh to Brighton via a show at London's prestigious Hammersmith Apollo on the way. The tour proved so popular that extra dates were added making the tour a 41 date sell-out.

Now it's time for the next exciting chapter with the release of their brand new album "Home" on 22nd October 2007.