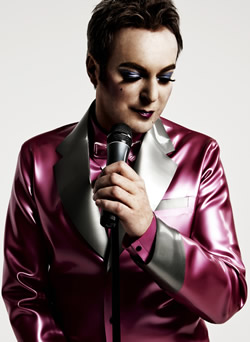 Julian Clary is looking for love and he’s not leaving town empty handed…..

Following the recent success of Lord of the Mince, which played a 140 date tour of the UK, Australia and New Zealand and was then recorded for DVD, Julian Clary –  “king of the double entendre”, “one of the last taboo-busters” and self-proclaimed national trinket –  is going back on the road. This time he’s looking for love and he’s not leaving town empty-handed.

“Hello, punters”, he says. “Know any half decent men? Might you bring them along so I can meet them?”

Julian will be scouring the UK in search of love. Position Vacant: Enquire Within is dedicated to one thing. Finding himself a husband. It’s not that he’s desperate. But he’s promised to leave no straight unturned.

“Because I’m still considered to be quite a catch and because the UK is noted for its heterosexuals on the cusp, there’s bound to be stiff competition”, says Julian.  “Therefore I’ll be hosting ruthless elimination games. You can be sure of one thing. By the end of the evening, we’ll all be celebrating my new partnership.”

A glass of Blue Nun may be available to those who make an effort or anyone named Jason. But please bring your own confetti.

“A HUGELY ENJOYABLE ROMP OF A COMEBACK…THE AUDIENCE – GAY, STRAIGHT, YOUNG, OLD – LOVED CLARY AND IT WAS EASY TO UNDERSTAND WHY” London Evening Standard (for  Lord of the Mince)

One of the most distinctive comics in the early days of alternative comedy, then an “overnight success” through his iconoclastic Channel 4 game show Sticky Moments, Julian Clary has spent 30 years in show business dividing his time between radio and television, films and stage as an actor, entertainer, presenter and writer. Three of his most recent achievements have been as a ballroom dancer (he was a finalist in BBC TV’s Strictly Come Dancing and later appeared in the UK arena tour), a journalist (he was a columnist for the New Statesman) and an author (his third novel will be published in March, 2012). Although he claims nowadays to enjoy the life of a country gentleman in his 16th century farmhouse, he can’t resist the lure of live performance. Last Christmas he starred with Joan Collins in the UK’s biggest panto, Dick
Whittington
in Birmingham, and he enjoyed himself so much in Lord of the Mince that he made almost immediate plans for his newest one-man show.

Julian is a regular panellist on Radio 4’s Just a Minute and also narrates The Little Princess animated series. He played the legendary panto dame Douglas Byng in the 3 part Radio 4 series The Byng Ballads, broadcast in November 2010.

His West End roles include Leigh Bowery in Boy George’s Taboo (2004) and the MC in Rufus Norris’s Olivier Award winning production of Kander and Ebb’s Cabaret
(2007). His autobiography A Young Man’s Passage was followed by the novels Murder Most Fab and Devil in Disguise.
He has recently completed Briefs Encountered.