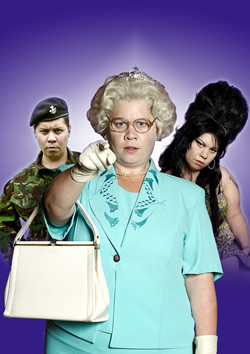 Katy Brand is taking her Big Ass on tour. Join the British Comedy Award Winner and star of ITV2’s Katy Brand’s Big Ass Show, Have I Got News For You and Peep Show, for an evening of anarchic comedy, celebrity satire, music spoofs and much, much more. Following the success of her hit TV show, Katy is returning to her live roots with this silly, sassy and smart evening of comedy. Featuring old favourites and new material, there’s something here for everyone.

The BBC today announced the first celebrity names lining up to trip the light fantastic for this year’s Let’s Dance for Sport Relief. Katy Brand, Rufus Hound and Shappi Khorsandi represent the world of comedy, alongside some of the nations favourite Grumpy Old Women, Jenny Éclair, Linda Robson, Lesley Joseph and Susie Blake. Also taking to the dance floor will be sporting greats such as footballers Peter Shilton and Rodney Marsh and snooker legends Willie Thorne and Dennis Taylor.

This year’s contestants will be judged by an all new and exciting panel that sees the judging line-up change for all four shows. The panel of three will predominantly feature faces from the world of comedy and celebrities who performed last year. Together the viewers and the panel will vote for their favourite dancers to go through to the final. Comedians confirmed so far are Jack Dee and Frank Skinner. Claudia Winkleman and Steve Jones return to host the show which kicks off Saturday 20 February on BBC One. The series will run over four weeks, comprising three heats and culminating in a spectacular final dance off on Saturday 13 March. The show will see some of the nation’s favourite celebrities pay homage to iconic dance routines in a bid to wow viewers with their moves and a chance to be crowned champion of the dance floor.

Each week a celebrity act (a mix of solo dancers, duos and groups) will perform a number of famous dances such as Single Ladies (Beyonce), Greased Lightning (Grease), Smooth Criminal (Michael Jackson), Bad Guys (Bugsy Malone) and Jai Ho (Slumdog Millionaire). They will work with a team of top choreographers to master the dance moves and with a team of stylists to represent their dance icon’s look. Will they rise to the Sport Relief challenge when they take to the floor and give the performance of their lives in front of a live studio audience and the panel? Who goes through and who gets a chance to compete in the final will be down to the public and the panel. The final will see six celebrity acts dance with the hope of being crowned the Let’s Dance For Sport Relief Champion on Saturday 13 March. Proceeds from the voting will go to Sport Relief.

Jo Wallace, Executive Editor, Comedy Entertainment, BBC, said, “Saturday nights on the BBC are all about eventful, big, fun, family entertainment and Let’s Dance For Sport Relief absolutely fits that bill. Following on from the last series, the celebrity packed show aims to have audiences singing and dancing along in their living rooms and no doubt in fits of laughter, as the stars of the show try to impress them and the judges with their dance moves, all in the name of charity.”

Malcolm Gerrie, CEO, Whizz Kid Entertainment, said, “Last year’s series exceeded all expectations and Robert Webb’s brilliant interpretation of Flashdance captivated the entire nation: young and old! This year, Let’s Dance for Sports Relief hopes to do the same again with some of the most iconic dances of all time being performed by some of the country’s most loved entertainers and sport stars.”

Comedian Robert Webb was crowned champion last year, when he wowed the public and judges in last year’s grand final when he produced a spectacular dance routine to Flashdance: What A Feeling. Tune in to see who dances off with viewers’ hearts to be crowned Celebrity Let’s Dance Champion for 2010.

The show will be produced by Whizz Kid Entertainment for the BBC
http://www.sportrelief.com/whats-on/news/lets-dance-back