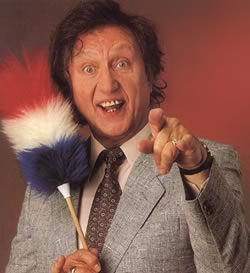 He is currently celebrating nearly 60 years of happiness and laughter, having become a professional entertainer in 1954.  Just a little over 10 years later, he made his debut at the famous London Palladium – where he enjoyed an unprecedented record breaking 42 week sell-out season!

In 1965 he removed his fellow Merseysiders The Beatles (then at the peak of their popularity) from No.1 spot in the pop charts with ‘Tears’ and today it occupies 10th place in the Top 20 best-selling records of all time.

His string of hits include ‘Love Is Like A Violin’ and his signature tune ‘Happiness’. Singing plays a prominent part in his stage act, and his amazing vocal range includes everything from the classics to pop music and even grand opera!

But it is his undoubted genius as a comedian that stamps Ken Dodd out as a showbiz legend.

Indeed, away from his hectic touring schedule, Ken was the first recipient of the prestigious ‘Living Legend’ award from The British Comedy Society. He also received a Lifetime Achievement Award in the British Comedy Awards and has been voted The Greatest Merseysider of all time – an accolade which relegated John Lennon and Paul McCartney into joint runner-up spot!

He’s been a bill-topper throughout his entire career and has starred in countless Royal Variety Shows (the most recent in the presence of HM The Queen and The Duke Of Edinburgh) and in sell-out record-breaking seasons at theatres like the London Palladium and Blackpool Opera House.

All have become best selling videos which have earned him Platinum and Double Platinum awards.

He’s played Malvolio in Twelfth Night, Yorrick in Kenneth Branagh’s epic film version of ‘Hamlet ‘ and ‘Mr.Mouse’ in the Hollywood film of ‘Alice In Wonderland’.  He was awarded the OBE in 1982 for his services to show business and charity.  He’s the first member of the TV Times ‘Hall Of Fame’ and, in addition to being a Freeman of the City Of Liverpool, he is also an Honorary Fellow of Liverpool John Moores University.

His portrait is hanging in the National Portrait Gallery in London, there is a statue of him  in Liverpool Lime Street Station, and his waxwork figure is in the new Madam Tussauds in Blackpool.

But surely, after his constant touring (he clocks up a staggering 100,000 miles every year) he must occasionally think about hanging up his famous tickling sticks and taking things easy for a change?

It’s not a question that sits easily with one of the funniest comedians that this country has ever produced. In fact, he’s quite nonplussed at the very thought of it!

“How dare you!! Missus!!!”  he says in mock indignation.  “I’ve never even thought about retirement.  Why should I when I love every second of doing my job? Anyway, it’s not really a job. I’ve been doing it for 57 years now and it’s more like a hobby, because I love it so much.  I’m very lucky to be doing what I want to do – and being paid for it at the same time!

“There have been lots of changes in lifestyle over the years, but one thing remains the same – audiences still go to a theatre wanting to be entertained. They come to my shows in search of happiness and that’s what I try to give them, with humour aimed at all the family. Age is no barrier: young, old, male, female. They all want a good old-fashioned laugh.

“When I go on stage I’m talking to people as individuals, not one great mass. You have to relate to every single person in an audience. You play them like you would play a violin or a piano. Collectively an audience is big and challenging, but you must never lose sight of the fact that it is made up of individuals”.

But how does he relax and unwind?  Well, he enjoys television but watches when most of us are in bed,  After his theatre shows Ken returns home to Knotty Ash in the early hours, and tends to view satellite and cable channels – especially those screening American comedy shows, and specialist channels like the ‘Discovery’ and History channels.

He also loves holidays (“exploring Capital cities is a wonderful way of unwinding” he says) loves reading (at the last count he had some 40,000 books), gardening and simply relaxing.

“I’m lucky because I never get tired of entertaining and making people laugh” he concludes. “Well, I do sometimes, but it doesn’t last for long! I think I’ve only had one day off in my entire career – and that was for suspected pneumonia. I was back on stage the next night with a mustard patch on my chest. The doctor insisted that I wore it, but all the stage hands kept rubbing their ham sandwiches on it, so it had to go!!

“As long as people keep paying me the privilege of coming to my shows and laughing their heads off, then I will continue touring this great country of ours. It’s my love. It’s my life and I enjoy every single minute of it. And, by jove, they can’t touch you for it!”