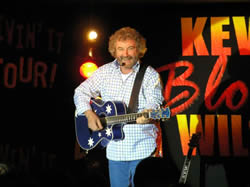 Twenty years, countless live gigs and millions of album sales down the track, Kevin Bloody Wilson has not only found his niche, he’s grabbed an esky and a deckchair and he’s made himself really bloody comfortable in it!

He’s been described as one of the funniest and most original singer/songwriters of our generation. His huge cult following in his native Australia would recommend that you be one of the first in the country to discover and rave about this unique comedian.

One thought on Kevin 'Bloody' Wilson