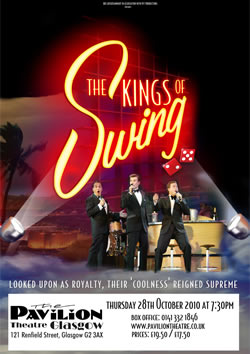 The Kings Of Swing

Looked upon as royalty, their ‘coolness’ reigned supreme.

Over recent years ‘Swing’ music and the big band sound has become extremely popular with the public. Successful albums such as ‘Music to watch girls by’ and Robbie Williams ‘Swing when your winning’ album and dvd has introduced swing to a whole new generation.

The concept of the show originated at the world famous Blackpool Tower in 2003. Since then the show has toured successfully, throughout the UK receiving rave reviews.

The ‘Kings of Swing’ is a live concert featuring the ‘Kings of Swing Orchestra’ under the direction of Paul Francis and presenting some of the best ‘swing’ vocalists currently performing throughout Europe.

Recreating and capturing the feel of the Rat Pack and much more, the show delivers all the greatest hits from the legends of cool!

Celebrating the hits of Frank Sinatra, Tony Benedict, Dean Martin, Bobby Darin, Nat King Cole with hits such as: Mr Bojangles, Mack The Knife, Fly Me To The Moon, Everybody Loves Somebody, That’s Amore, I Get A Kick Out Of You, Beyond The Sea, New York New York and many more.

This is a slick, smooth talking, fast paced show which will whisk you off to Vegas before you can say “JD on the Rocks”. Once the dice have rolled, the band strikes up, the curtain rolls back ….from then on, anything can happen!
If ‘ SWING IS YOUR THING’ then this is the show for you!