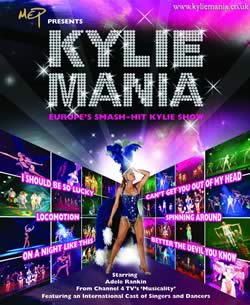 Kylie Minogue is a living legend… from ‘Locomotion’ to ‘Can’t Get You Out Of My Head’ her award winning career has been credited with over 40 smash hit singles, record breaking international tours and iconic roles in both film and television.

The Showgirl phenomenon lives on with ‘Kylie Mania’….. ‘Europe’s Smash Hit Kylie Show’ which has extraordinarily captured the look and sound of the ‘Princess of Pop’, astonishing audiences with impressive vocal performances, outstanding choreography and spectacular sparkling replica costumes.

Adele Rankin from Channel 4 Television’s ‘Musicality’ appears as ‘Kylie Minogue’, with an international cast of singers and dancers, for a celebration of Kylie’s memorable chart topping hits.

This contagious and energetic show will have you up on your feet, dancing in the aisles and begging for more.