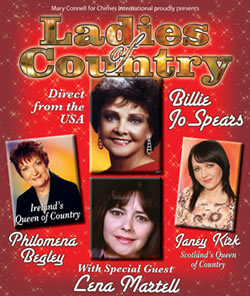 This
superb, heart-warming and nostalgic show features hit recording star Billie Jo Spears performing all of her
popular releases including Blanket on the
Ground, What I’ve got in Mind, 57
Chevrolet and many, many more. An extremely talented line up of world-class
country starlets provides support for Billie Jo, with Lena Martell, Philomena Begley and Janey Kirk all bringing their
astounding gift to The Pavilion Theatre Glasgow  on 15th May at 7.30pm.

Hailing from Beaumont, Texas, Billie
Jo Spears made her professional debut at only 13 years old in an all-star
country concert in Houston. It wasn’t until 1969, however, when Mr. Walker, It’s All Over climbed into
the country Top Five that Billie Jo really made it big. Despite continued
success throughout the seventies, Billie Jo suffered from vocal difficulties
which almost left her unable to sing ever again. Thankfully she made
a full recovery and returned with the seductive and sensual, number one hit, Blanket on the Ground in 1975. The
success of her music at home and abroad earned her a devoted following in her
adoptive home, Great Britain, where she returns for another unforgettable
evening.

Billie
Jo is joined on stage by Scotland’s internationally acclaimed singing starlet Lena Martell, most famous for her
wonderful UK chart-topping single, One Day at a Time” in 1979. Although having been off the circuit for a
while, Martell has now returned to her number one passion, music, and joins us
for this fantastic show.

Irish
born Philomena
Begley also takes to the stage this
year, adding a further measure of Celtic charm to proceedings. Her first
venture as a singer was with the popular Old
Cross Céilí Band, later called The
Country Flavour. Having toured the world,
playing at the Grand Ole Opry, St. Patrick’s Day parade in New York and Carnegie Hall,
it’s no wonder she has received such high praise from the music world. Daniel O’Donnell once said of her, “When Philomena sings a song you feel that
she’s experienced every emotion she expresses.”

Finally,
Scotland’s newest and most talented ‘Queen of Country’ Janey Kirk completes the bill having made a name for herself after
her recent album, the scintillating Sweetheart Darlin’
of Mine.

Don’t
miss out on this good ole night of country music which will have you clapping
your hands, tapping your feet and singing along to some country classics!

One thought on Ladies Of Country