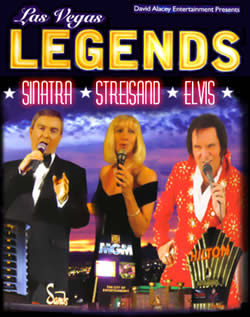 LAS VEGAS LEGENDS is a remarkable tribute to three of the world’s greatest entertainers Frank Sinatra, Barbra Streisand and Elvis Presley and a sensational salute to the city that made such an impact on their careers. This show brilliantly captures the glamour and style of a night with these unique stars is Las Vegas. Special guests such as Nancy Sinatra or Sammy Davis Jnr may even drop in to add to the fun and excitement on stage! LAS VEGAS LEGENDS also features a fabulous orchestra, Vegas showgirl dancers and, of course, three incredible performers in the principle roles.

David Alacey who also devised and directed this show recreates his acclaimed portrayal of Frank Sinatra also seen on tour with THE RAT PACK IS BACK.

Tina Law’s hugely successful solo show has played every major theatre and cabaret room in Europe and she is recognised in Britain as the ultimate tribute to Barbra Streisand.

For over 15 years Neil J Duncan has been selling out venues throughout the country with his Elvis – The Concert Years and has made countless appearances on television and radio as the King. In 2005 Neil was voted the best Elvis impersonator in the UK.

Only in Vegas could three such incredible performers appear in the same dazzling show. So prepare yourself for a breathtaking Vegas night in the company of legends.