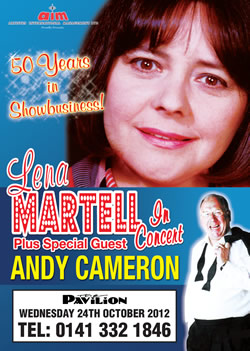 Lena Martell – 50th Anniversary Concert:
Lena Martell has recorded over thirty albums, had her own BBC network TV show with twelve and a half million viewers, over a ten year period on Saturday nights. Lena was British TV personality four consecutive years, has silver, gold and platinum discs, has played on Broadway, London’s West End in musicals and a sell out season at The London Palladium where her box office matched Shirley Maclaine and Bette Middler, Lena was delighted as she admires both these entertainers. In 2012 Lena celebrates 50 years in Showbusiness and she is very honoured to be starting her celebration tour at the Pavilion Theatre – Glasgow. Lena will be joined on her very special night by Glasgow’s very own Mr Funny man Andy Cameron. Come along to this special night of song and laughter.

Sean Connery Quoted at the Edinburgh Festival 2004; “The best singer not to record a Bond soundtrack was Lena Martell” 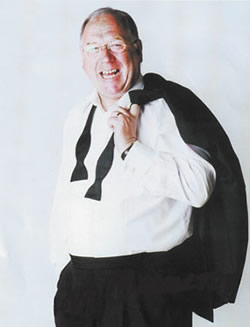 In 1975 Andy Cameron came second in New Faces leading to several appearances on variety shows such as Live at Her Majesty’s with Jimmy Tarbuck and Tarby and Friends. In 1979, soon after the establishment of BBC Radio Scotland, he was given a thirteen week contract to present a programme of music and humour. The show eventually ran for fifteen years. He was voted Radio Personality of the year in 1984. He had his own series on BBC Scotland in 1979 and again in 1982. He was awarded Scottish Television Personality of the Year for his 1983 series called It’s Andy Cameron.

Dont miss a great night out…