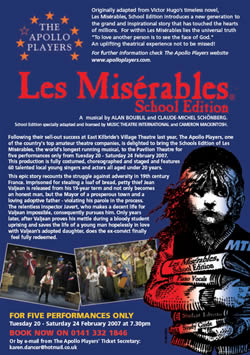 Originally adapted from Victor Hugo’s timeless novel, Les Misérables, School Edition introduces a new generation to the grand and inspirational story that has touched the hearts of millions. For within Les Misérables lies the universal truth "To love another person is to see the face of God." An uplifting theatrical experience not to be missed! For further information check The Apollo Players website www.apolloplayers.com.

Following their sell-out success at East Kilbride’s Village Theatre last year, The Apollo Players, one of the country’s top amateur theatre companies, is delighted to bring the Schools Edition of Les Misérables, the world’s longest running musical, to the Pavilion Theatre for five performances only from Tuesday 20 – Saturday 24 February 2007. This production is fully costumed, choreographed and staged and features 60 talented local young singers and actors all aged under 20 years.

This epic story recounts the struggle against adversity in 19th century France. Imprisoned for stealing a loaf of bread, petty thief Jean Valjean is released from his 19-year term and not onlybecomes an honest man, but the Mayor of a prosperous town and a loving adoptive father – violating his parole in the process. The relentless Inspector Javert, who makes a decent life for Valjean impossible, consequently pursues him. Only years later, after Valjean proves his mettle during a bloody student uprising and saves the life of a young man hopelessly in love with Valjean’s adopted daughter, does the ex-convict finally feel fully redeemed.