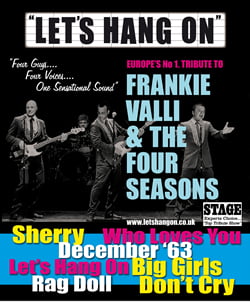 an outstanding tribute to

FRANKIE VALLI
AND THE FOUR SEASONS

Let’s Hang On are an amazing live band who perform, with the greatest of accuracy ‘an outstanding tribute’ to the music of Frankie Valli & The Four Seasons…

The music of Frankie Valli, Bob Gaudio, Tommy DeVito & Nick Massi was recognised around the world for it’s legendary falsetto lead vocal & incredible doo-wop harmonies, making these blue collar boys from the wrong side of the tracks, who wrote their own songs, invented their own sound, one of the biggest pop sensations of all time!!!

Let’s Hang On will take you back to this magical time in music history. Performing all your favourite hits, Sherry… Big Girl’s Don’t Cry… Rag Doll… Walk Like A Man… Dec ‘63 (Oh What A Night)… Can’t Take My Eyes Off You… and many many more

So don’t miss this exciting show, guaranteed to have you singing at the top of your voices and dancing in the aisles

Have we got a show for you…

One thought on Let's Hang On