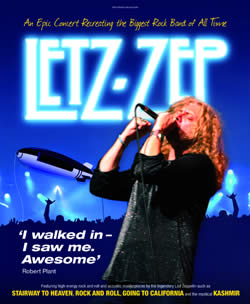 The music of epic rock band Led Zeppelin has never been more popular!

A phenomenal 20 million fans tried to buy 20,000 tickets when they went on sale recently with their first live concert in 27 years at London’s O2 Arena. The concert sold out instantly!

British band Letz Zep are critically acclaimed forerunners, recreating the music of Led Zeppelin live for thousands of fans every year. In recognition of their talent they were invited to perform at the prestigious official launch party for Led Zeppelin’s ‘Mothership’ album in Soho, London.

Speaking after seeing Letz Zep perform legendary Zep front man – Robert Plant commented it was like watching himself onstage. As he told Q Magazine in an interview “I walked in, I saw me!”

Letz Zep shows are not an exercise in nostalgia, but a revolt against time, a heart rendering shout against mediocrity and forgetfulness, faithfully recreating the sights and sounds of Led Zeppelin at their awesome best.

From the classics, ‘Stairway to Heaven ‘and ‘Rock and Roll’, the gentle ‘Going to California’ and the haunting ‘Kashmir’ a show by Letz Zep portrays the entire scope of the music of Led Zeppelin, who remain the most influential and iconic rock band of all time.

Jeremy Clarkson – The Sunday Times “Fantastic….just like the real Page and Plant”

Janick Gers – Iron Maiden “This is the closest to the real thing that you are ever likely to see and hear…Brilliant!”

Jonathan Ross – BBC Radio 2 “They’re fantastic and I recommend you go and see them!”