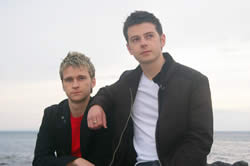 An Evening With The MacDonald Bros

Fresh from their No.1 Scottish album in April, The MacDonald Bros are back and are proud to announce their first headlining Scottish tour which is widely expected to be a sellout.

The tour is being called; "An Evening With The MacDonald Bros". It will give the chance for the lads to re trace their musical roots from prize winning young child Celtic musicians to gold selling album artists and X Factor finalists.

In addition there will even be an opportunity for their multitude of fans to put questions to Brian and Craig live on stage and many of the songs included in the show will be performed in an unplugged/acoustic style.

Brain and Craig who recently made Scottish pop history by being the first Scottish act on a Scottish indie label to go straight in at No1 in the Scottish charts with their debut album said…………….